During a March webinar, Citrix announced Managed Desktops (aka CMD) Service, its new Desktop-as-a-Service offering. According to Citrix, Managed Desktops is the simplest and fastest way to deliver virtual apps and desktops in Microsoft Azure.

I first talked about CMD Service in a previous blog post following the announcement but no much was available at the time. We learned more details about it at Synergy 2019, and I recently had the opportunity to test the tech preview. Here are my first impressions about Citrix Managed Desktops Service.

What is Citrix Managed Desktops?

Managed Desktops is a new simple turnkey Citrix Cloud service that aims to facilitate Windows (including Applications and Desktops) deployments in Microsoft Azure.

Deploying virtual desktops or apps in the cloud is often associated with complexity —  you have to think about the technologies you want to use, the platforms, etc. With the Managed Desktops Service, Citrix aims to eliminate the complexity of cloud management, in order to quickly provide access to the key applications and services to keep users productive. CMD is the third model of Citrix deployments, in addition to customer-managed deployments (DIY in public clouds and on-premises) and dual-managed deployments in Citrix Cloud.

In short, Citrix Managed Desktops Service (CMD) is a simplified version of Citrix Virtual Apps And Desktops (CVAD) based on 1-click actions. And everything is billed directly to Citrix, as opposed to juggling multiple vendors.

With CMD, Citrix has introduced managed templates for the first time. The company supports three OS versions with CMD Service for multi-session, static, or random catalogs:

These three operating systems are managed by Citrix, and delivered with Citrix Virtual Desktop Agent (pre-installed). CMD Service will be the first Citrix solution to support multi-session Windows 10. However, the initial solution offering will be based on a Windows Server desktop in anticipation of Day 1 support of the upcoming Microsoft Windows Virtual Desktop multi-session Windows 10 experience when it releases.

You will be able to have domain-joined or non-domain-joined virtual machines for the first time with CMD. At this time, only Windows 10 Pro is supported in non-domain-joined catalogs. This will be resolved with the release of Virtual Desktop Agent 1906 by the end of the June 2019.

Of course, you can still import your own VHD templates hosted in Azure, and you can even update Citrix-managed templates with your own applications.

On top of all that, Citrix is also becoming a Microsoft Cloud Solution Provider, and will bill customers directly for this service. Included in the bundle is the cost of cloud services, software licenses, and Azure compute needed to securely deliver Windows 10 on-demand. You will be billed for the first time directly by Citrix (monthly, pay-as-you-go, and 1-to-5 year options) for all costs associated with this service.

Note: You will have to commit on the number of licenses you need before using the CMD Service.

Customers will also have the option to bring their existing Microsoft licenses such RDS CAL for Windows Server workloads or eligible Windows (E3/E5) licenses for Windows 10 workloads.

CMD is the first subscription based service with seamless upsell/upgrade. Here’s a pricing breakdown:

The service will be available by end of H2 2019 to all customers.

And last but not the least, Citrix is going to make it really easy for customers to move from Managed Desktops to Virtual Apps and Desktops with seamless upsell/upgrade. This can be used for customers that need more features than what is available in the Citrix Managed Desktops Service. Citrix will allow them to move the Citrix Virtual Apps and Desktops without having to migrate catalogs and virtual machines.

Also included is the optional Citrix-managed Azure Active Directory that is recommended for testing and building a proof of concept.  Users can be easily provisioned in this managed AD in less than 1 minute. Then they will receive an email invitation to join the directory.  It’s worth noting that Citrix-managed Azure AD will not be manageable by customers, and only supports non-domain-joined virtual machines.

If you are familiar with Citrix Cloud, you probably know that you can connect your own Active Directory (requires Citrix Cloud connectors). It’s still possible with CMD Service, but you will be responsible for maintaining the directory and the connectors.

How can you bridge CMD Service with an infrastructure located on-premises?

There are different options to deploy Citrix Managed Desktop Service:

As you can see with the options listed above, Citrix Managed Desktops Service can be extremely simple, but it can also be more complicated for advanced use cases.

Citrix announced at Synergy 2019 that Citrix Cloud will support Okta in the near future. We can expect Citrix Managed Desktops to support it, as well.

Where does Citrix Managed Desktops Service stand in Citrix offering?

Each option has been developed by Citrix for a specific use case.

Citrix recommends that customers try out Citrix Managed Desktops Service first to see if it fits their needs. If a more robust configuration with more features is required, customers should look at Citrix Virtual Apps and Desktops (CVAD) Service in Citrix Cloud for hybrid deployments. Finally, if neither of those two options work for them, Citrix recommends that customers deploy the full version of Citrix software either on-premises or in public clouds.

You can take a look at this Synergy 2019 session to gain more insight:

Windows Virtual Desktop (WVD) is a hot topic of conversation these days. Microsoft and Citrix have introduced Citrix Managed Desktops as deeply integrated with WVD. But the reality is a little less exciting.

At Synergy 2019 in Atlanta, Microsoft and Citrix had a few sessions together about Citrix Managed Desktops Service and Microsoft Windows Virtual Desktop (WVD). They mentioned that Citrix Managed Desktop Service uses WVD in the background, which is confusing for customers. This means that CMD Service is not an integration of WVD (even if it is marketed as such), but an advanced and turnkey replacement provided by Citrix. This solution will include Citrix signature HDX desktop virtualization protocol (instead of RDP for WVD) to provide a high-performance user experience.

You can also decommission the CVAD service you already have, but you may have to contact Citrix to perform this operation. Check out this article to get more information.

It is also required to purchase a minimum of 25 licenses. I don’t think this it is a wise move from Citrix. Desktop-as-a-Service (DaaS) offering should not have such a high number of minimum licenses. As an example, you can start playing with Nutanix Xi Frame with as few as 5 users. While I don’t know why Citrix imposed such restrictions, my guess is that it is driven by the cost associated with the Citrix Managed Desktops infrastructure in Microsoft Azure. Customers who need less than 25 licenses will be redirected to partners.

It seems that Citrix is deploying at least two Cloud Connectors for each CMD catalog.

The quick catalog creation feature is currently limited to Windows 10 Pro 1809 with static virtual machines and without corporate network connectivity.

Windows 10 EVD for non-domain-joined is not available yet. We have to wait for Citrix VDA 1906.

Regarding Citrix policies, it is currently not supported in CMD Service, but you can apply settings via GPO in a domain joined deployment.

Citrix did a great job with Citrix Managed Desktops (CMD) Service. The UI is great and reminds me a lot of Azure Quick deploy, which is how all Citrix Cloud native services should look like. So what’s missing? Well, not much. Here’s a short list of areas of opportunity to consider:

Citrix is working hard to resolve these issues before the GA of Citrix Managed Desktops Service.

Citrix Managed Desktops (CMD) Service is a promising all-in-one cloud-hosted service that can scale as needed, and for the first time ever, you can buy Citrix management services and Microsoft Azure compute together. CMD Service is the perfect example on how well-made and easy to use all Citrix Cloud services should be for customers. We can expect more cloud services to embrace the same approach with one keyword: simplicity.

At first it seemed that Citrix was trying to sell to customers directly, but the company wants to allow partners to build on top of CMD Service with the future integration of multi-tenancy. Partners will be able to manage multiple customers from the same CMD management console and build services directly on top of Citrix Managed Desktops, enabling customized services for vertical markets.

The target of this service is temporary workforce, developers,and  business continuity for SMB customers. I don’t expect large customers to move to a cloud-hosted Desktop-as-a-Service solution anytime soon,but they could be tempted to explore Citrix Managed Desktops Service for specific use cases that need to be deployed quickly, and do not require advanced configuration.

Currently only available for Microsoft Azure, Citrix might introduce this service to other cloud providers such as AWS or Google Cloud Platform in the future.

The service is currently in tech preview, and only available to limited customers. Citrix plans to expand the tech preview to more customers by the end of Q2 and to release the service by end of H2 2019. 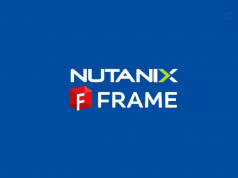 I’ve tested Nutanix Xi Frame and it is…